Thomas Nevin’s father, John Nevin snr (1808-1887) served in the Royal Scots First of Foot at the West Indies from 1825 and at the Canadian Rebellions 1838-41, before embarking on the voyage to Tasmania in March 1852. He worked as a pensioner guard on board the convict transport the Fairlie for the passage of his English-born wife Mary Ann Nevin nee Dickson (1810-1875) and their four Irish-born children, all under 12 years of age, namely: –

The Ratio of Convicts to Free Settlers in Tasmania 1818-1857

On their arrival at Hobart in July 1852, 10 year old Thomas Nevin joined the small population of free settlers numbering 44,340 in the December 1852 Census. The convict population numbered 19,105 or 30% of the total census for that year. But by 1857, only five years later, with the cessation of transportation to Van Diemen’s Land in 1853, the convict population dwindled to just 3,008 or 3.7% of the island’s population. The numbers recorded for the Aboriginal population – estimates of 7000 in 1818 to 15 in 1857 – speak clearly of genocide.

Such exposure from an early age to convicts made Thomas J. Nevin the most suitable candidate of all Hobart professional photographers to undertake contractual commissions to document habitual and repeat offenders, several of whom were transported convicts sent back to the Port Arthur prison after serving their initial sentence. As re-offenders with a further sentence in the Supreme Court, they were relocated from Port Arthur back to the Hobart Gaol if sent there after 1871, the process undertaken from October 1873 onwards. They were photographed by Nevin on being “received”.

Thomas J. Nevin began the systematic documentation of prisoner identification photography in mid 1872, working at several sites, namely: the Port Arthur prison on the Tasman Peninsula (1873-4); the city police courts and Supreme Court next to the Hobart Gaol , with the assistance later of his younger brother Constable John Nevin (1872-1888); and the Municipal Police Office Hobart Town Hall where he was Office and Hall Keeper for the Hobart City Corporation (1875-1880). In later years he acted as bailiff’s assistant to detectives serving warrants with known offenders’ photographs attached (to ca. 1886). Over the decade and longer, the Nevin brothers produced over a thousand original and duplicate mugshots of Tasmanian prisoners, the bulk of which was lost, destroyed or sold at auction. One notable auction was in Hobart in the late 1890s (Alexander, A. 2010). Less than 400 or so (three hundred plus) photographs of Tasmanian prisoners (“convicts”) taken by T. J. Nevin survive from the 1870s, and only those it seems, which were selected by archivists and collectors such as John Watt Beattie in the 1900s on the basis of the prisoner’s notoriety (and the quality of Nevin’s photography, which Beattie admired). Many were offered for sale at travelling exhibitions associated with the fake convict hulk Success in the early 1900s.

The complete list of convicts arriving on the Fairlie 1852 was compiled by the State Library of Queensland from British Home Office (HO) records, available on microfilm as part of the Australian Joint Copying Project online here at source.

The Parkhurst Boys 1852
This information is copied verbatim from the website Convicts Central (formerly online):

The ‘Fairlie’ is said to have left the Isle of Wight on March 2, 1852 and to have travelled to Van Diemen’s Land (Tasmania) with 30 Parkhurst boys on board.

She sailed from Plymouth on March 11, 1852 with a total of 292 male prisoners and arrived in Hobart on July 3, 1852. All 32 Parkhurst boys were said to have disembarked in Tasmania

Paul Buddee’s book, ‘Fate of the Artful Dodger’ and his research notes which were deposited in the Battye Library in Perth some time later, listed the boys.

The 30 ‘exiled’ boys who were transported on the ‘Fairlie’ are transcribed below.

Nevin’s mugshots of Tasmanian Prisoners 1870s
Thomas J. Nevin photographed at least two of the transportees from the group of Parkhurst boys and the group of adult male prisoner group from the Fairlie (1852). As with all offenders, they were photographed on sentencing and discharge according to the rules adopted from NSW and Victorian legislation by 1872. When the Queen Victoria Museum and Art Gallery held an exhibition in 1977 of seventy (70) or so of T. J. Nevin’s photographs of prisoners, the curator’s press release noted that several adults photographed in the 1870s had been Parkhurst boys. George Nutt aka White, for example, was transported as a Parkhurst boy, and Michael Murphy as an adult, both of whom voyaged on the Fairlie, along with free settlers John Nevin and family, arriving at Hobart in July 1852. Both were recidivists who re-offended, and were photographed by Nevin on incarceration at Supreme Court sittings in Hobart. Neither was photographed at Port Arthur, nor were the vast majority of these men whose photographs have survived. The archivist or collector who wrote the prisoner’s name and ship, plus the date “1874” and “Taken at Port Arthur” on the verso in the early 1900s did so with the commercial imperative and an eye to attracting the tourist to Port Arthur, promoted then as now as Tasmania’s premier tourist attraction. 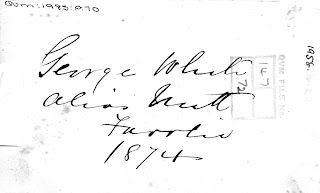 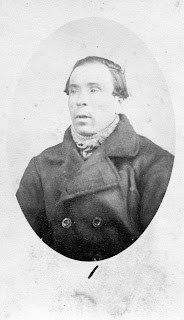 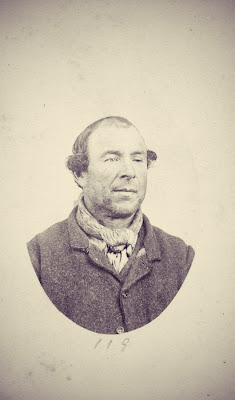 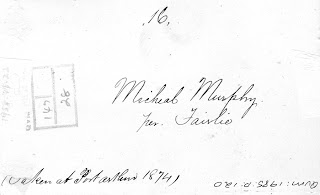 The police gazette records for these men and many more who arrived on the Fairlie 1852 are now online at the Archives Office of Tasmania, called Tasmania Reports of Crime Information for Police.

The ship’s records of prisoners’ conduct are also online – see this digitised record Item: CON33-1-107 for the original convicts record book of the Fairlie 1852, with this information about George Nutt:

Detail of convict record (below) of Michael Murphy.
Archives Office of Tasmania CON33-1-107P171