Less than a dozen portraits and stereographs have survived in public and private collections of the work conducted by Robert Smith (n.d.) and Thomas J. Nevin while operating the firm with the name business name “NEVIN & SMITH” at the former studio of Alfred Bock, 140 Elizabeth Street, Hobart (Tasmania) from ca. 1867 to February 1868 when the partnership was dissolved.

This rare hand-tinted portrait was taken by Thomas J. Nevin of his fiancée Elizabeth Rachel Day (1847-1914) while in partnership with Robert Smith ca. 1868.

The “coloured ones from Smiths”
Robert Smith may have been an independent photographer prior to his partnership with Thomas Nevin. By about 1863, according to Mrs Esther Mather (1795-1872), Smith was providing the citizens of Hobart Town with coloured photographs. In this letter written by Mrs Mather to her [step] grandson, dated 1st October, 1865, she refers to a coloured portrait taken at Smiths, possibly a few years earlier, which compared less favourably with the one taken that day of her brother at Charles A. Woolley’s studio. The entire letter is transcribed here because of the insights she gives into family life in 1865, and her use of language.

Notes and Source: Morris Miller Library, University of Tasmania
Special Collections Ref: M.19/70
Notes: “The letter is from the Mather family papers and is from Esther Mather to her [step] grandson, Joseph Francis Mather, in which she makes reference of her likeness from Woolleys being better than the coloured ones from Smiths. It is dated 1.8. 1865”

My dear Francis,
Thou wilt think me long in not not [sic] sending the likeness I promised but it has not been for want of thought about thee but I have been so very much engaged with one thing or another that I have hardly had time to write a few lines but thou wilt be better off in the end for I only met up with my Brother to day [sic] which I also enclose Its from Wooleys [sic] and I consider it a very good # one [superscript inserted] probably more like him now than the coloured ones from Smiths I dont remember having given George one but if I have not I will get one for

[Page 2]
Him and send It. I was in Liverpool Street this morning and saw thy Father and Sisters who seem all well at present Esther has been poorly but She is now quite convalescenct [sic] Lizzy Amos is still with them Marion with the two children are at Brocks Buildings went yesterday and are to return tomorrow they have very many engagement [sic] and their time will be getting short
This day week thy Cousin has to give his Lecture a vey [sic] formidable thing for him I dont think I shall go to hear him I should be afraid of his Breaking down
I have no doubt but at times thou wilt feel lonely at being much shut out from society

[Page 4]
as harmless might be wrong for either of you but my dear Francis I feel as tho [sic] I need hardly write to thee is this ? [word is illegible] being persuaded that thou art endeavouring to follow thy Divine leader
My Brother is only poorly at present He writes with me in love to thee and George tell the later [sic] I beleive [sic] all are well at the Bank
I remain thy affectionate
Grandmother
Esther Mather
20 Wilmot Terrace Harrington Street
Hobart Town 1st 8/65

The portrait (below) of a grandmother and toddler, identities unknown, was taken by Charles A. Woolley in the late 1860s, certainly some time later than 1866 because of the wording on verso, “Melbourne 1866, Prize Medal awarded to Chas. A. Woolley, 42 Macquarie St. Hobart Town.” This is the type of portrait to which Esther Mather refers in her letter. We can clearly see, 160 years later, that Nevin & Smith’s tinted portrait is by far superior, technically speaking; it has survived mould and mistreatment, it has retained its delicacy of colouring and sharpness on albumen, which Woolley’s portrait, faded and fuzzy and foxed, has not. Esther Mather’s abjection of Smith’s earlier portrait of her brother in favour of one by Woolley, however, may be index of a prevalent social prejudice against colouring, which prettified the truer likeness or “reality” conventionally rendered in sepia.

Thomas Nevin’s ‘ornaments of different colours’
On the evening of December 3rd, 1880, Thomas Nevin, Town Hall keeper, was apprehended by two policemen who were chasing a man pretending to be ghost. Nevin was detained because he was (a) in the close vicinity of the man when the incident occurred, and (b) he was allegedly intoxicated while still on duty as keeper of the Hobart Town Hall. Although not charged with the offense of acting in concert with the “ghost”, he was dismissed from his position of Town Hall keeper for being intoxicated while on duty. The court proceedings reported by the Mercury the next day began with Nevin’s defense by the Mayor:

By the MAYOR: … It was not true that between the hours of 10 and 11 o’clock on Thursday night, Constables Oakes and Priest took witness home in a state of intoxication. Witness had a photographic apparatus and chemicals in his possession. He had not made any ornaments of different colours for any one lately. He was not at any time on Thursday night under the influence of liquor. He did not think it was right to leave the Town Hall for so many hours as he had. He considered, however, that when he heard the constables’ whistle he was justified in going to render them assistance.

The reader of the report learns that the “witness” – Nevin – who had spent the evening with photographer and friend Henry Hall Baily was on his way home to the Town Hall in the possession of photographic equipment and chemicals. This account clearly indicates that Nevin was producing photographic work while fully employed as the Town Hall keeper.

Additional details in his defense underscore his reputation for producing coloured photographs – “ornaments of different colours” – although not for “anyone lately“. What might this mean? It possibly refers to his privileged association with his solicitor and mentor, former Attorney General Giblin, whose contractual arrangements secured Nevin the position of prison photographer at the Port Arthur prison and Hobart Gaol from February  1872.  Nevin’s coloured carte-de-visite of W.R. Giblin is held at the Archives Office of Tasmania. At least six photographs – hand-tinted mugshots – taken by Thomas Nevin for police and prison authorities in the 1870s are extant in public collections, viz. the National Library of Australia and the Tasmanian Museum and Art Gallery.

Thomas Nevin’s own family portraits of his sister Mary Anne Nevin, his wife Elizabeth Rachel Day, his self-portrait, and this early one have survived in excellent condition in the Nevin family’s collections. The vignettes are hand coloured. His partnership with Smith only lasted until 1868, when Nevin’s most commercial stamp resumed the original design of Alfred Bock’s stamps, with additional flourishes. His government contractor stamp – with the Royal colonial warrant – appeared later still, ca. 1873. 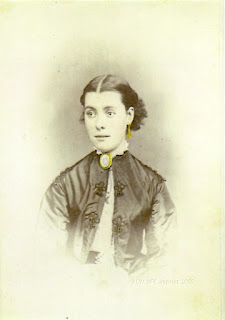 Elizabeth Rachel Day (born Rotherhithe UK 1847- died Hobart Tasmania 1914) was barely out of her teens when the photographers Nevin & Smith composed two portraits in different formats of her in the mid to late 1860s. She was the eldest daughter of Captain James Day, master mariner (1806-1882) and Rachel Pocock who were married at St David’s Hobarton, 6th January 1841 in the presence of Margaret Fuller and Captain Edward Goldsmith, brother-in-law of Captain James Day. Rachel Pocock died of consumption in 1857, just four years after the birth of her second daughter Maria Sophia Day. Both Elizabeth Rachel and Mary Sophia were nieces of Captain Edward Goldsmith. Elizabeth Rachel Day married Thomas J. Nevin in 1871 at the Wesleyan Church, Kangaroo Valley (renamed Lenah Valley in 1922) next door to the schoolhouse where John Nevin snr, Thomas’ father, taught local children. Thomas also took a full length portrait of Elizabeth Rachel Nevin while working with Robert Smith in 1867-68.

In February 1868, the partnership was dissolved, apparently with unpaid liabilities. Robert Smith departed Hobart, establishing a studio at Goulburn, NSW before taking up farming and politics.

The dissolution notice published in the Hobart Mercury on 26 February 1868 of the partnership between Robert Smith and Thomas Nevin. William Robert Giblin, later Attorney-General and Premier, was Thomas Nevin’s solicitor and witness.