The State Library of Victoria has recently digitised these two photographs from the John Etkins Collection, donated in 2005.

T. NEVIN late A. BOCK stamp
The first of these two cartes-de-visite pasted to a plain buff oval mount is an upper body portrait of an unidentified woman seated against a dark background. The verso is stamped with Thomas Nevin’s most frequently used studio stamp for private clientele, a more decorative version of an early design by Alfred Bock featuring a belt encircling both his name and Bock’s, containing his address, topped with a kangaroo and the words “Ad Altiora.” Thomas Nevin acquired Alfred Bock’s lease on the studio, the City Photographic Establishment, 140 Elizabeth Street, Hobart Town, on Bock’s insolvency in 1865 and departure to Victoria in 1867.

STAMP with the PRINCE of WALES’ blazon
The second photograph of two children (below) bears a rare studio stamp by Nevin & Smith verso which features the Prince of Wales’ blazon with the three feathers and coronet, banded with the German “ICH DIEN” (I serve).

These two children were possibly photographed for an album of photographic prints depicting the children of Tasmania which was gifted to Prince Alfred Earnest Albert during his visit on the royal yacht H.M.S. Galatea to Hobart in 1868.

According to Jack Cato in The Story of the Camera in Australia (1977 ed. p.58), a group of Tasmanian photographers was invited to contribute. Cato says:

All the cities presented the Duke with official albums of photographs, and many photographers presented private ones. Henry Johnstone gave him a book of pictures of the beautiful women of Victoria. Charles Nettleton gave a book of prints of Melbourne and the countryside. But best of all was the one given by the photographers of Tasmania – a collection of prints showing the beautiful children of the island. The Duke was so charmed with it that he requested a duplicate album be made and sent to his mother.

Where is this album? Four photographers were known to have received commissions from the colonial government of Tasmania to cover Prince Alfred’s visit, notably Samuel Clifford and George Cherry, and possibly Cato is referring to this group, but an album of children’s portraits taking by this group to commemorate the event as a Royal gift has yet to come to light. The Illustrated London News of July-December 1868 reported that on his return, Prince Alfred presented Queen Victoria with gifts from the colonies, including albums depicting native flora and fauna, but no mention of this particular album of children’s photographs by Tasmanian photographers has come to light. This cdv, incidentally, is in very poor condition but still worth inclusion in a state collection.

The studio decor – notably the carpet and chair – differs from Thomas Nevin’s studio portraits taken later, in the 1870s. However, the same childish hand has been at work here, heavily daubing the curtain with the same inept strokes and the same mulberry colouring evident in other photographs in private collections, for example, the cdv of a young man posing with Nevin’s big box tabletop stereoscopic viewer from the private collection of John and Robyn McCullagh. Could they have all come from the same album belonging to a household with children? The colouring was not the work by Nevin or his studio assistants. It contrasts markedly with the delicate tinting on several portraits of Nevin’s family and private clients taken in the late 1860s and 1870s, including a few of his photographs of prisoners. 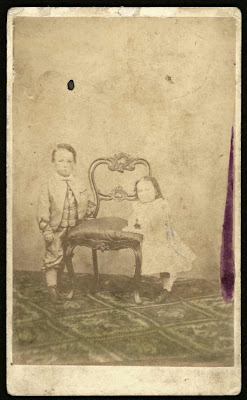 This studio stamp from Nevin & Smith with the inclusion of the Prince of Wales’ blazon, is the second type of stamp from Thomas Nevin’s studio that bears an official insignia. Whether his use of this blazon was to signify a commission to contribute to the photograph albums gifted to Prince Alfred is quite possible though as yet undocumented. The blazon was used on decorations for official functions during Prince Alfred’s visit to Hobart in 1868. The banneret (below) adorned the ball given in his honour. Quite different is T. J. Nevin’s official government contractor stamp which appears on prisoner identification photographs taken at the Port Arthur prison and Hobart Gaol (below).  It features the Royal insignia of a lion and unicorn rampant encircled by a belt carrying Nevin’s name and studio address. It was devised by government printer James Barnard to endorse all official colonial government documents, including the weekly police gazettes.

[Above]: Silk banneret with Royal Arms from a ball given in Alfred’s honour at Hobart, Jan. 1868
Source: State Library of NSW