Extant examples of Thomas J. Nevin’s photographs taken in the 1870s of Tasmanian prisoners – or “convicts” which is the archaic term used in Tasmanian tourism discourse up to the present – number more than 300 in Australian public collections. These two different photographs of prisoner George Leathley are typical of his application of commercial studio portraiture. They were taken by Thomas J. Nevin between Leathley’s conviction for murder in 1866 and Leathley’s discharge with a ticket of leave in 1876. During those years, the earlier photograph, No. 14, was the first, taken in 1872 and reprinted in 1874, entered into the Hobart Gaol photo book as No. 226, pasted again onto Leathley’s criminal record sheet. The photograph with the recto No. 89, might evince an older George Leathley, taken in 1876 on his discharge. His original conviction in 1866 was death, commuted to life in prison.

Professional photographer Thomas J. Nevin was commissioned by his family solicitor, the Hon. Attorney-General W.R. Giblin, to photograph prisoners for the Colonial Government of Tasmania as early as 1871, the year the government of NSW authorised the Inspector of Prisons, Harold McLean, to commence the photographing of all prisoners convicted in the NSW Superior Courts.

New South Wales 1871
The colony of New South Wales had already introduced the practice of photographing prisoners twice, firstly on entry to prison and secondly near the end of their term of incarceration by January 1872 when this report was published in the Sydney Morning Herald. The purpose of the visit to the Port Arthur prison by the former Premier and Solicitor-general from the colony of Victoria with photographer, Thomas Nevin and the Tasmanian Attorney-General the Hon. W. R. Giblin on 1st February 1872 in the company of visiting British author Anthony Trollope, was to establish a similar system for processing prisoners through the central Municipal Police Office, Hobart Town Hall on their relocation from the dilapidated and dysfunctional Port Arthur prison to the Hobart Gaol in Campbell St. The few remaining prisoners at Port Arthur were returned to Hobart from mid-1873 to early 1874. Some were photographed by Nevin at Port Arthur, but the majority were photographed by Nevin on arrival in Hobart.

PHOTOGRAPHY AND PRISONS.-We understand that, at the instance of Inspector-General McLerie, Mr. Harold McLean, the Sheriff, has recently introduced into Darlinghurst gaol the English practice of photographing all criminals in that establishment whose antecedents or whose prospective power of doing mischief make them, in the judgment of the police authorities, eligible for that distinction. It is an honour, however, which has to be ” thrust ” upon some men, for they shrink before the lens of the photographer more than they would quail before the eye of a living detective. The reluctance of such worthies in many cases can only be conquered by the deprivation of the ordinary gaol indulgencies; and even then they submit with so bad a grace that their acquiescence is feigned rather than real. The facial contortions to which the more knowing ones resort are said to be truly ingenious. One scoundrel will assume a smug and sanctimonious aspect, while another will chastise his features into an expression of injured innocence or blank stupidity which would almost defy recognition. They are pursued, however, through all disguises, and when a satisfactory portrait is obtained copies are transferred to the black books of the Inspector-General. The prisoners are first ” taken” in their own clothes on entering the gaol, and the second portrait is produced near the expiration of their sentence. When mounted in the police album, the cartes-de-visite, if we may so style them, are placed between two columns, one containing a personal description of the offender, and the other a record of his criminal history. Briefer or more comprehensive biographies have probably never been framed. Copies of these photographs are sent to the superintendents of police in the country districts, and also to the adjoining colonies. To a certain extent photography has proved in England an effective check upon crime, and it is obviously calculated to render most valuable aid in the detection of notorious criminals. New South Wales is, we understand, the only Australian colony which has yet adopted this system ; but the practice is likely soon to become general.

Tasmania 1873
Following the NSW government example, Thomas Nevin photographed men convicted in the Hobart Supreme Court who were housed in the adjoining Hobart Gaol. Those men who were convicted in regional courts with sentences longer than three months were transferred to Hobart. He took at least two original photographs of the prisoner, on different occasions: the first, the booking shot, was taken on entry into the prison, sometimes when the prisoner was unshaved and in ordinary or street clothing as soon as convicted; the second was taken fourteen days prior to the prisoner’s discharge. Additional prisoner photographs were taken by T. J. Nevin at the Port Arthur penitentiary between 1872 and 1874, and at the Cascades Prison for Males with the assistance of his younger brother Constable John Nevin in the unusual circumstance of the transfer of 103 prisoners from the Port Arthur prison to the Hobart Gaol at the request of the Parliament in 1873. Up to six duplicates were produced from each negative.

The inscriptions on the verso of this and many more cartes-de-visite duplicates – “Taken at Port Arthur, 1874” – together with the convict’s name and ship on which he was transported have nothing to do with the “belief” published by Chris Long in 1995 (TMAG) that A. H. Boyd, Commandant at Port Arthur until December 1873, was the photographer of these Tasmanian prisoners. A. H. Boyd was not a photographer by any definition of the term, and had nothing to do with the production of these mugshots. The inscriptions on verso and recto were used archivists and/or copyists such as John Watt Beattie who sold them to tourists, and date from the 1890s-1920s. His reproductions and montages of these 1870s mugshots were displayed on the fake convict ship, the Success, during visits to Hobart, Brisbane, Adelaide, and Sydney.

One image, two copies with different numbering on mount: Nevin photographed Leathley while incarcerated at Port Arthur and the Hobart Gaol .

George Leathley was sentenced to death for murder in January 1866, sentence commuted to Life.

George Leathley was discharged from Hobart Town on 2nd February, 1876 with a ticket-of-leave. 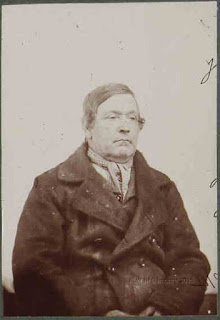 [Above]: Prisoner mugshot of George Leathley 1870s
On left, print from T. J. Nevin’s original glass plate, collated on a panel reproduced by Beattie in 1916
On right,  the black and white print produced from Nevin’s original sepia print at the QVMAG in the 1980s, cleaned of scratches and cracks.

The panel prepared by John Watt Beattie has the original sepia print of Leathley pasted in top row, second from right:

George Leathley was granted a ticket of leave, 1854.

CONVICT INDENT RECORD
George Leathley was transported for horse-stealing from Mr. Sam Petty of Holbeck, Yorkshire near Leeds and transported for 12 years. His name is the second entry of page (left) and details on second page.

1862: premature birth and death of daughter

A daughter, named after her mother, Catherine Leathley, was born prematurely and died two hours later on 29th January 1862.

CHARGE of MURDER. – George Leathley, blacksmith, was brought up, and charged by Detective Morley with the wilful murder of Elijah round, and remanded until Tuesday next.

Testimonies and verdict in the case of George Leathley

THE CONVICT UNDER SENTENCE OF DEATH. – At the meeting of the Governor in Council on Monday, the case of George Leathley, convicted at the recent Supreme Court Sessions, of the wilful murder of Elijah Round, and sentenced to death was reported upon by his Honor the Chief- Justice when the Council taking circumstances in consideration, decided upon sparing the man’s life, commuting the sentence to imprisonment for life.

George Leathley’s sentence of death for the murder of Elijah round was commuted to life
Launceston Examiner, 1st February 1866

[Above]: Letter from Sergeant A. Jones at the Watch House, Police Office, dated 26th January 1866 to the Colonial Secretary Hobart a day after George Leathley was convicted of murder and sentenced to be hanged. The letter informs the CS that two of Leathley’s boys – George and David – were being kept at the watch house after being found wandering the streets. The letter recommends that George and Catherine Leathley’s children – Sarah (aged 10), Ann (aged 12), David (aged 7) and George (aged 13) – be placed at the Asylum at New Town. The mother  Catherine had recently spent two months in detention at the House of Corrections for Females, Cascades, for default of a payment and being idle and disorderly. Both parents are described as being of a “most dissolute character“.

1894: George Leathley imprisoned for 14 days
By September 17th, 1894, when George Leathley, recorded as 75 years old, was charged with Breach of the Health Act, his photograph taken at the Hobart Gaol and pasted to an otherwise blank rap sheet, depicted an elderly man just a few months away from death.