Elizabeth Rachel Nevin nee Day (1847-1914) and professional photographer Thomas James Nevin (1842-1923) had seven children, six surviving to adulthood. Their first child and daughter Mary Florence Elizabeth (May) Nevin was born at her father’s photographic studio, The City Photograhic Establishment, 140 Elizabeth St. Hobart, in 1872. Their second child and first son, his father’s namesake Thomas James (Sonny) Nevin was also born at the photographic studio, 140 Elizabeth St Hobart in 1874. Their third child and second son Sydney John Nevin was born at the Hobart Town Hall in October 1876 where they resided during Nevin’s appointment as Office and Hall keeper to the Hobart City Council, but died a few months later in January 1877. Their fourth child and third son William John Nevin was also born at the Hobart Town Hall in March 1878; he died in a vehicle accident in 1927. Fifth child and fourth son George Ernest Nevin was the third child born at the Hobart Town Hall, in 1880. Their sixth child and second daughter daughter Mary Ann (Minnie) Nevin was born at her grandfather John Nevin’s house, Kangaroo Valley, New Town in 1884, and their seventh child, fifth son and youngest, Albert Edward Nevin, was born at the family residence and business, 236 Elizabeth St. Hobart in 1888.

The names by which they were commonly known are indicated in heavy type.

From the Drew Album
Fifth child and fourth son George Ernest Nevin (2 April 1880-30 July 1957) was the third child born to Elizabeth Rachel and Thomas James Nevin snr during their residency at the Hobart Town Hall. This childhood photograph (below) was taken at his father’s studio at New Town (Hobart) ca, 1885. It was reproduced as a black and white copy from the original held in the family album of his younger sister Minnie Drew nee Nevin who died in 1974. The album was donated from her estate to the Archives Office of Tasmania by V. Hooper of the funeral directors firm Hooper & Burgess, on the 30th August 1974.

For this sitting, George was photographed wearing a soft silk jacket buttoned to the neck over a white shirt with frilled collar and cuffs, a short kilt, white bloomers and socks with black buttoned shoes decorated with a rosette. His hair was cut short, and he was seated side saddle on a wooden horse, his stare quite intense as he watched and listened to directions from the photographer, who was in all probability his father.

George Nevin’s scrapbook
Thanks to George’s prescience in keeping photographs taken by his father of the previous generation, images have survived in a scrapbook as reproductions of the 1870s originals of his grandparents, parents, uncles, and their friends, but they are in poor condition. He cut and pasted the original photographs to the ledger’s pages, adding captions, some so fragile they appear to have been reprinted on thin paper.

The scrapbook itself, now in the possession of the family of the late Denis Shelverton whose direct lineage was great grandson of Thomas and Elizabeth Nevin, grandson of their youngest daughter Minnie Drew nee Nevin, and son of Minnie’s daughter Jean Shelverton nee Drew and husband Arthur Shelverton. The scrapbook was originally a ledger book used by George Nevin at the Henry Jones IXL fruit export factory in the 1920s. George also collected and pasted photographs of in-laws, and pink pages from the Trotting Globe detailing the racing results of his younger brother Albert Nevin with pacers on the Tasmanian race tracks.

This “collage” is one of George’s scrapbook items. Beneath the photograph of his mother Elizabeth Rachel Nevin he has written the word “MAR” and beneath the full length portrait of his father Thomas J. Nevin is written the word “PAR”, a phonetic reflection of an Irish brogue which might have characterised his Irish-born grandfather John Nevin’s speech. Centre is a cut-out of one half of a stereograph showing the path leading to the (Lady) Franklin Museum, Ancanthe, Kangaroo Valley, Hobart where the Nevin family settled in the 1850s. Although in poor condition, these images are valuable for researchers as well as family members

Scrapbook collage by George Nevin of his father’s photographs ca, 1872-1878
Left and right: portraits of George’s parents Elizabeth “MAR” and Thomas “PAR”.
Centre is a cut-out of one half of a stereograph showing the path leading to the (Lady) Franklin Museum, Ancanthe, Kangaroo Valley, Hobart where the family settled in the 1850s.
Copyright © Family of the late Denis Shelverton Private Collection & KLW NFC Imprint 2006-2009 ARR.

Rabbiteering
George Nevin worked on whaling ships, in factories, and shared a carrier business with his older brothers William and Thomas “Sonny” Nevin. One source of income during the depression times of the 1890s was rabbit shooting. The photograph below of a group of rabbiteers with hunting dogs, a bounty of rabbits, and draught horse and cart, shows George in his early twenties on viewer’s extreme right, with a small dog, taken in the Tasmanian countryside near a church or community hall. His father Thomas might have been the photographer, since it was taken by someone with photographic equipment travelling with them. 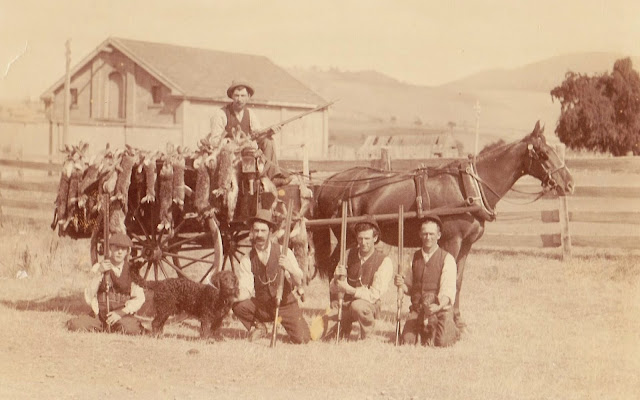 Young Edwardian Gentleman
Though manual labour and gardening appeared to be his main source of income, George Nevin liked to dress as a young Edwardian man about town on special occasions. He swapped his dirty work clothes for these two full-length studio portraits taken in his best suit ca. 1901-10. The first, the earlier photograph, might have been taken on his 21st birthday. He posed with right arm resting on the family’s wicker whatnot, his left arm bent, hand positioned with two fingers on his hip, and gaze directed fully at the photographer, possibly his father Thomas J. Nevin. The wicker whatnot which was still used as a pot plant stand in the home of Thomas and Elizabeth Nevin’s youngest son Albert in the 1950s, appears in several family photographs taken in this era. Thomas Nevin was still taking family photographs up to his death in 1923.

The Vegetable Gardens
In later years, between the 1920s and the 1950s, when four of Thomas and Elizabeth Nevin’s adult children lived at the property 23-29 Newdegate St. North Hobart, George maintained vegetable gardens between the stables. He also maintained acreage at Penna near Richmond, Tasmania where he grew that delicious Tasmanian variety called “New Potatoes”.

The black and white photograph (below) was taken at 23 Newdegate Street with Jack Davis, on left, pointing at George, ca. 1938. Jack Davis (John William Davis) and Frances Florence Davis nee Stewart, were parents of Emily Maud Davis who married George’s younger brother Albert Nevin in 1917 at Launceston. Emily and Albert Nevin lived in the small house on the Newdegate St. property. Albert kept his work horses and pacers in the stables there, George grew vegetables there, and May earned income from dress-making as a business from the big house.

Jack (John William) Davis, father-in-law of George Nevin’s brother Albert (father of Emily Maud Nevin nee Davis), pointing at George Nevin on viewer’s right. Taken in front of the latticed verandah at the back of the big house at Newdegate St. ca. 1935. George is holding glasses in left hand. The tattered and dirty clothes of these men were probably donned for working in the stables and vegetable garden on the property at 23-29 Elizabeth St. North Hobart.
Copyright © KLW NFC Imprint Private Collection 2005 ARR.

Soon after Thomas J. Nevin’s death in 1923, four of his six adult children – May, George, William, and Albert – were resident at the property, 23-29 Newdegate St. North Hobart. The eldest, Tom Nevin, known as Sonny, had married in 1907 and was living in California by 1920. The youngest daughter Minnie was also married in 1907 to van proprietor James Drew and was living in Cedric Street (later renamed Wignall St.) William’s furniture carrier business was advertised on a sign at the front gate, visible on left in this photograph.

The 1950s
George Ernest Nevin lived with his eldest sister May Nevin in the big house at 23 Newdegate St. North Hobart until her death in 1955. Neither May nor George appear to have married.