When Thomas Nevin sat down to read the Mercury on the morning of 24th October 1872 and turned to an article reprinted from the London papers on “the valuable working of the Prevention of Crimes Act, or as it is better known, the Habitual Criminals Act” of 1871, he was more than aware of the use of photography by police. He had already taken photographs of prisoners at the Hobart Gaol at the behest of his solicitor and mentor since 1868, Attorney-General William Robert Giblin.

… regulations as to the photographing of all prisoners convicted of crime who may for the time being be confined in any prison in Great Britain or Ireland, and may in such regulations prescribe the time or times at which and the manner and dress in which such prisoners are to be taken, and the number of photographs of each prisoner to be printed, and the persons to whom such photographs are to be sent:

6 Register and photographing of criminals

These regulations were observed by the police and prison authorities in Tasmania, whenever the circumstances permitted. The “dress” prescribed by regulations required two types of photographs: a “booking photograph” in which the prisoner wore his own civilian clothes, usually taken on arrest; and an incarceration photograph, showing the prisoner in standard issue prison uniform during his service of a sentence. Examples of both types of photographs, and of the same prisoner, are extant and bear Thomas Nevin’s  government contractor stamp with the Royal Arms insignia (QVMAG; SLNSW; NLA). Nevin made at least four duplicates from his original glass negative of more than a thousand prisoners: one to be pasted to the criminal’s record sheet; one to be held at the Central Registry, Town Hall, and the rest to be circulated to police in the event of release or warrant for additional offences.

The article in  the Mercury which Thomas Nevin read on the morning of 24th October 1872, detailed the role of prisoner identification photographs as an effective means of crime control:

… Here, again, we have a reduction of nearly one-fourth of the total amount, while the same return shows the valuable working of the Prevention of Crimes Act, or as it is better known, the Habitual Criminals Act. In 1869 crimes of violence had risen to a total of 441, while there was every probability of a still further increase. The strong representative powers vested in the executive police were immediately acknowledged by the criminal classes, for in the following year the number had fallen to 326, although for some years previous there had been a general advance. The system of supervision by the police, the accurate registration and photographing of prisoners, though still in its infancy, and requiring further development, has given the police a greater knowledge of the previous life of criminals and a considerable control over their actions, while the payment of the gratuity money to discharged prisoners …

Extract from the Mercury, 24 October 1872
From the London papers reporting the impact of police supervision of prisoners and habitual offenders through the use of photography.

A Royal Commission into Penal and Prison Discipline in Victoria, which was reported in the Melbourne Argus on 31 May 1871, recommended in a report to the Governor that the central police office should keep a register of all persons convicted of a crime  –

“containing full particulars for identification, as well as the gaol history, and photographic likenesses of each prisoner, taken when admitted and discharged. Copies of this register and of the photographs should be sent to all the gaols throughout the colony …”

Penal and Prison Discipline,
The Argus (Melbourne) 31 May 1871

The Tasmanian colonial government introduced formal amendments to the Police Act of 1868, with additions made according to the amendments to the Victorian Police Act 1873 per the Royal Commission’s recommendations of 1871. By February 1872 Thomas J. Nevin had commenced photographing inmates at both the Hobart Gaol and the Port Arthur penitentiary, and continued to do so until the mid-1880s. His contract of 3 x 3 x 3 years with Attorney-General W.R. Giblin was effective from 1868, initially within the Lands and Survey Dept., which was then formalised by early 1872 to include photography of prisoners, and was tabled as a full time civil service position on Thomas Nevin’s appointment to the position in 1876 of Office and Hall Keeper for the Hobart City Council, the Hobart Municipal Police Office and the Mayor’s court, all housed at the Town Hall. His contracts and commissions ceased in 1886.

Thomas Nevin, Office-keeper for the Municipal and Police Offices of Hobart Town,
published in the Mercury January 1st, 1878.

During those years Thomas J. Nevin was responsible for the Criminals Register at the Town Hall Office and its supplement of his prisoner ID (identification) photographs. Thomas Nevin’s younger brother and assistant at the Hobart Gaol, Constable John (W.J. or Jack) Nevin, continued with prisoner identification photography at the Hobart Gaol until his (Jack’s) death in 1891. Their job entailed the photographing of convicted males at least twice: on admission to the Gaol, and on release from custody. Prisoners with prior convictions were also photographed while incarcerated and awaiting trial, a duty performed by a prison official specifically appointed. Constable W. J. (John) Nevin, Thomas Nevin’s brother performed this duty prior to each criminal sessions to assist his brother prepare the lists and the required quantities of plates, chemicals etc. Once released, the ex-prisoner was required to report regularly to the central Police Office at the Hobart Town Hall where the Registers were kept updated. This procedure was adopted as early as January 1873 with the commencement of the transfer of prisoners from the Port Arthur penitentiary, 60 kms from Hobart, to the city prison in Hobart, and escalated in July  1873 with the tabling of a report of the remaining prisoners due for transfer from Port Arthur to the Hobart Gaol by Attorney-General W.R. Giblin in Parliament.

The Case of Charles Downes
Prisoner Charles Downes, transported on the Rodney 2, was photographed by T. J. Nevin at the Supreme Court, Hobart Gaol on 13th February 1872 when Downes was sentenced to death. He was reprieved to life imprisonment for the rape of a 9 year old girl in 1875. This duplicate of Nevin’s original photograph is held at the National Library of Australia, incorrectly catalogued with the date “1874” and the place “Port Arthur.” Downes’ name too is incorrectly spelt as “Dawnes“.

The Archives Office of Tasmania also holds a copy or duplicate with the prisoner’s name spelt correctly as “Downes”, and with Nevin’s correct attribution, but with incorrect details pertaining to the date and place of photographic capture. The mount is numbered “44”. 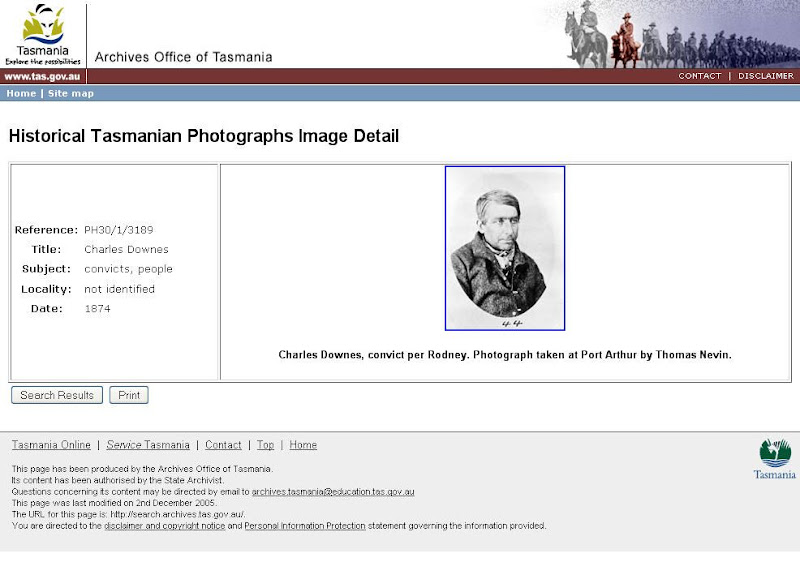 Charles Downes was arrested by the Hobart Town Municipal Police for the theft of a mason’s hammer and new spade, the property of Henry Surman. The notice was published in the police gazette, 1st September 1871.

The second, for his release from the Hobart Gaol, 29 November 1871.

The third, for his conviction for rape and death sentence.  Within weeks of his release, Downes offended again. On 13 February 1872, he was convicted for rape of a 9 year old at the circus on the Domain.

The gazette was prepared by the Municipal Police Office for their Central Registry, located at the Hobart Town Hall. It was printed weekly by the government printer James Barnard, and formally titled Tasmania Reports of Crime Information for Police.

Newspaper Reports
Details of the crime were made public in the Mercury, 15 December 1872.

Charles Downes was found guilty on a charge of feloniously assaulting Dorothy Smith, aged 9 years, in Stacey’s revolving circus in the Queen’s Domain, and remanded for sentence.

Public outrage at capital punishment, sparked by the execution of Job Smith whom Nevin had photographed under the alias of William Campbell (NLA and TMAG Collections), referred to the reprieve granted to Charles Downes, as well as Marsh and Henry Page, in letters to the Mercury, May 29th 1875. This letter expressed disbelief in the inconsistencies of the sentences:

Charles Downes was granted a reprieve. He died in custody at the Hobart Gaol. The inquest into his death was published in the Mercury 13 August 1878.

Transportation Records
At the Archives Office of Tasmania:

2. Conduct records – convict records show Charles Downes was tried and sentenced to 10 years imprisonment in 1847 at Guildford (UK), was convicted for theft of a leaden weight and minor thefts of turnips and chickens for shorter periods, and arrived in Hobart on the Rodney 2 on 20 December 1851. He received a conditional pardon (CP) and ticket-of-leave (TOL) in August 1853.

Someone has written on this record this information –

– and signed and dated the annotation at Hobart, 21 April 1877. This annotation was probably made for the compilation of the Criminal Register at the Municipal Police Office, Town Hall, in the same year 1877, in which The New York Times published an article (March 25, 1877) from The London Times reporting the publication of a Register of Criminals for the years 1869-1876.