DISMISSAL from Town Hall keeper position
In early December 1880, Thomas Nevin was dismissed from the position of “Keeper” at the Hobart Town Hall on a trumped-up charge of inebriation while on duty brought on as revenge by Constable John Blakeney who was hoping to make the rank of Sergeant when his dereliction of duty – being drunk and asleep at 3am in the first week of October 1880 – was reported by Town Hall keeper Thomas Nevin to the Police Office and Mayor as a potential risk to the Hobart Town Hall’s security just months earlier.

Reported in the press during December 1880 and January 1881, the Mayor’s Committee expressed deep regret at Thomas Nevin’s dismissal from the position of Town Hall keeper (an archaic term which included the duties of keeper of public archives). Mindful of Nevin’s growing family, the Hobart City Council retained his government contract with warrant and photographic duties as assistant bailiff to the Municipal Police, Hobart and the New Town Territorial Police. Working principally in the City Police Court and Hobart Supreme Court as assistant to Sub-Inspector John Dorset(t), Nevin continued to provide identification photographs of prisoners up until 1886, a service commenced in 1872 under a 14-year contract to the colonial government’s prison administration. Many of these mugshots were collated with warrants issued by the Municipal Police Office. For example, two death warrants with T. J. Nevin’s photographs of the condemned man attached (e.g. James Sutherland 1883; Henry Stock 1884) now survive intact in the Mitchell Collection at the State Library of NSW. 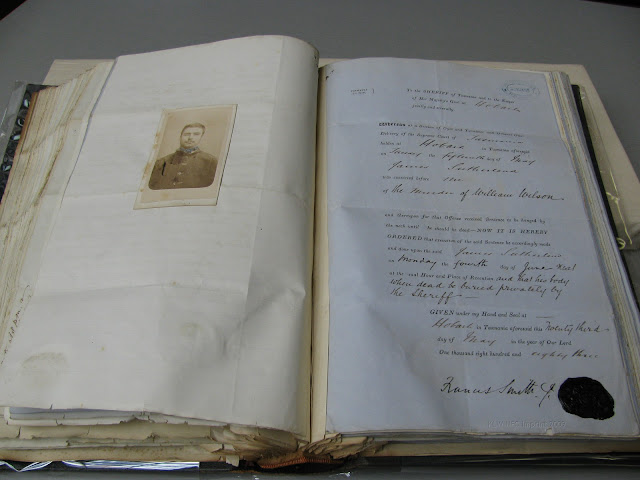 [Below]: This photograph also by T. J. Nevin was the “booking photograph” of Sutherland taken on arrest (NLA Collection).

CHARGED with breach of the EDUCATION ACT
On July 26, 1886, Inspector John Dorset(t) of the Hobart Town Municipal Police visited Thomas Nevin’s house with a request for his services as assistant bailiff. Insp. Dorset found a child in bed with the whooping cough, and two weeks later gave testimony to the City Police Court of the situation when Nevin faced charges of a Breach of the Education Act by schools truancy inspector Mr Moore for not sending his child to school. Because of Inspector John Dorset’s testimony, the charge against Nevin was dropped.

Thomas Nevin caused laughter in the court with this comment:

Defendant said that he was the father of a large number of children, and did not know which one was referred to. (Laughter.)

How many is a “large number of children“? Thomas and Elizabeth Nevin were parents of five living children by 1886: Mary Florence (aka May) born 1872; Thomas (aka Sonny) born 1874; Sydney born 1876, died 1877; William John born 1878; George born 1880; and Mary Ann (aka Minnie) born 1884. In all probability, it was either William or George who was reported as not attending school. The last child Albert Edward was not yet born: he arrived in 1888, and fathered in turn eight children.

Thomas Nevin was also charged [ie in addition to other parents for the same breach] with a breach of the Education Act. He pleaded not guilty. Mr Moore gave evidence as to the non-attendance of the child, and said that he had served two notices on defendant requiring him to send the child to school. Defendant said that he was the father of a large number of children, and did not know which one was referred to. (Laughter). He said that his children were bad with the whooping cough. He called John Dorset [sic], who stated that he employed defendant occasionally as an assistant bailiff. He called at defendant’s house on the 26th of last month, and one of the children was then bad with the whooping cough. The POLICE MAGISTRATE said that the law laid the onus [italics] on defendant to prove that his children were sick; he had raised some doubts in the minds of the magistrates on this point, and the Bench would give him the benefit of it.

Read the full article here below and the meaning of the term “a free scholar” in 1886:

ASSISTANT BAILIFF
As assistant bailiff, Thomas Nevin accompanied the Police Constable, the Superintendent, or the Inspector when the warrant was served on a defendant. He was also present when the charge was laid in court, and present again when sentence was passed. On any one of these occasions he was required to photograph the defendant. For example, he accompanied Superintendent George Nichols, P.C. Badcock of the New Town Territorial Police and Sub-Inspector John Dorset (t) in these instances published in the weekly police gazettes:

William Graves has been arrested by P. C. Badcock, of the New Town Territorial Police, assisted by Thomas Nevin.

Thomas Nevin sometimes photographed prisoners again during incarceration for felonies committed while under sentence, assisted at the Hobart Gaol, Campbell Street, by his brother Constable W. J. (Jack or John) Nevin, as well as photographing the prisoner at released or discharge. On any one of these occasions he made four to six duplicates of the one image from his glass negative for circulation to police in Tasmanian regional stations and if requested, to police in the other Australian colonies.

Thomas Nevin’s photographic techniques applied to the production of prisoner mugshots for police and prison authorities changed over the years. In the early to mid-1870s, his practice was commercial and his techniques reflected the usual carte-de-visite studio portraiture methods of the era. By the early 1880s, cognizant of prison photography techniques deployed elsewhere in Australia, in Europe and in America to show full-frontal and profile characteristics of the prisoner, his photographs conformed to prison requirements.

This is one example, of a young prisoner who was originally named as John Morrison in the National Library of Australia’s catalogue, eg. for the NLA exhibition “In a New Light: Australian Photography 1850s-1930s”, 9 Oct. 03-26 Jan. 2004, and renamed as John Norman in 2013.

This young locally-born (“native”) 19 year old John Morrison or John Norman was photographed on being received at the Hobart Gaol on February 16, 1884 by Constable John Nevin. The National Library has included the photograph among the collection of the earlier 1874 convict photographs taken by Thomas J. Nevin, and retained the prison location as Port Arthur despite the simple fact that in 1874 the prisoner would have been only 9 years old, and clearly he is not a child in his photograph. As for the place of imprisonment, he could not have been imprisoned to serve his 12 month sentence at the Port Arthur prison because it was well and truly closed by 1877, and by 1884 it was in ruins.

Not simply content with misleading the public with this sort of catalogue entry, the NLA has compromised Thomas J. Nevin’s former sole attribution (correctly identified from accession in the 1980s until 2007) for this collection of Tasmanian prisoner mugshots with a parasitic misattribution to the non-photographer and retired Port Arthur prison official A. H. Boyd, the result of deliberate falsification by individuals (eg Julia Clark) seeking appropriation and self-promotion.

Click on the second image below or visit the NLA catalogue full records of the “Port Arthur convicts 1874” collection to examine this egregious mismanagement of the national heritage since 2007 by the National Library of Australia.