Bert and Eva’s flight from Hobart just weeks before their marriage was an elopement so worrying to Eva’s parents Albert and Emily Nevin that they inserted this notice “MISSING GIRL” in the Mercury, June 24, 1935:

MISSING GIRL
Eva Elizabeth Nevin, aged nearly 18, has been reported missing from her home, 23 Newdegate Street, North Hobart since Saturday evening. She is 5ft 5in. high, and is well built. She has dark eyes and complexion, and short curly dark hair. It is thought she may be wearing a black velvet dress, with patent leather shoes, and light stockings.

Three weeks later, on August 17, 1935, Eva and Bert married in East Melbourne. Bert was the only son of Mr and Mrs B. Morris, of Service Street, Hobart.

Eva and Bert Morris returned to Hobart briefly during the 1940s when Bert enlisted in the Army, but settled permanently in Melbourne soon after on Bert’s discharge in 1943. 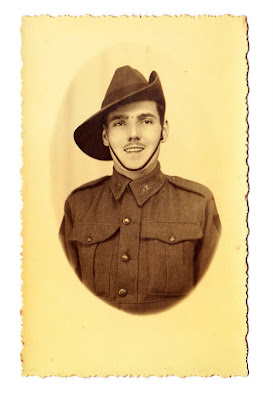 Above: Eva Morris (nee Nevin), in the doorway of the Murray Street Rooms Hobart 1940.