Samuel Page held the government contracts for the Royal Mail coach deliveries between Hobart and Launceston. As part of his commission to provide photographs of various government services, T. J. Nevin phtographed the coachline. In addition to the Royal Mail, Samuel Page transported prisoners from regional stations and courts to be “received” at H.M. Gaol, Hobart, accompanied by constables. Thomas Nevin travelled between Hobart and Launceston on several commissions, sometimes in the company of Samuel Clifford (1874), combining commercial photography with official photography for the Municipal and Territorial Police. The original of this photograph may have been produced during the criminal trial of Elliott (Administratrix) v. Page (Mercury 18 June 1874),  in which –

“…the deceased, Mr. Elliott, was killed on the 26th December by the upsetting of the defendant’s coach near Oatlands, such upsetting having been produced by the recklessness of the driver, recklessness which had been persisted in despite the remonstrances of the guard to secure the brake before proceeding down the hill where the coach was turned over….”

By 1874 the use of photography in criminal matters was an established practice. Photographs of the scene of the accident resulting in Elliott’s death were also produced and referred to, as in this witness account:  “I recognise the photograph showing where I was thrown, I was thrown against the fence slightly.”

The top photograph may have been painted with omissions in order to sell the coach in 1880. A Brougham, similar to the one photographed by Nevin, was offered for sale at Burdon’s per this advertisement in The Mercury of 2-19 November, 1880:

The photograph with the figure of Tom Davis is held in the TMAG Collection and features in the TMAG video of railways and coaches, Railway Station Hobart.

The Painted Photograph
This photograph may not be the only one taken by Nevin of Samuel Page’s coach line, as earlier researchers in the 1980s noted that several trade advertisements by Nevin were extant in public collections. Strictly speaking, this was taken for government services rather than as an advertisement for Burdon’s or Page’s business interests.The verso notes suggest that either the untouched original was held at the property called “Entally” or that it is a copy of the same photo held at Entally which had been altered to eliminate the figure of Tom Davis. The area to the viewer’s right of the coach bears clear evidence of a man’s figure painted over. Tom Davis was employed at Burdon’s in Argyle Street as a coach painter. 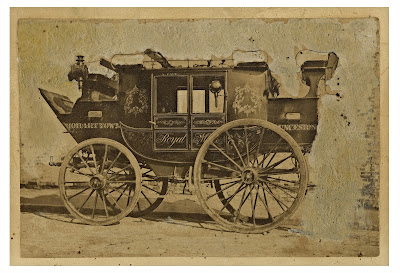 Inscription: handwritten on the reverse:

“From same photo held at Entally/ painted out background/ Burdons Coach Factory/ Man on r.h.s. of photo Tom Davis (has been painted out)/ 1872/ A.B. McKellar 328 Liverpool St/ coach body maker employed at Burdon and son when this coach was built”

This item is yet another example of an original photograph taken by Nevin with a provenance from a Northern Tasmanian family which bears evidence of paint subsequently applied by his client(s). See these examples held at the QVMAG, at the State Library of Victoria, and in the Private Collection of John McCullagh.

On February 1st, 1873, the same day on which Thomas Nevin advertised his services to provide “A first-class photographic likeness” at reduced costs “to suit the times“, Samuel Page’s advertisement appeared below Nevin’s also advertising a reduction in fares:

PAGE, SAMUEL (1810-1878), publican, coach proprietor and pastoralist, was born on 30 March 1810 in London, the second son of George Page of Bermondsey, and his wife Sarah. His father, a Waterloo veteran, arrived in Hobart Town in January 1822 from England in the Tiger, settled at Bagdad and was later granted land at Lemon Springs although he claimed to have migrated without a shilling. His wife and three children, Samuel, John and Louisa, arrived in Van Diemen’s Land in the brig Belinda in November 1823.

On 19 September 1833 at Hobart Samuel Page was married to Grace, daughter of Captain Harris, a master mariner. In 1835 he was granted the licence of the Glasgow Wine and Spirits Vaults at the north-east corner of Elizabeth and Liverpool Streets in Hobart, and two years later took over the Lake Dulverton Inn at Oatlands. In 1839 he moved to the Oatlands Hotel. With John Lord he became a coach proprietor in 1848. Next year he bought from the widow of John Edward Cox a coach service that had run between Hobart and Launceston for seventeen years. In 1853 Page took over the mail contract and after six years bought out John Lord for £8750. With three coaches daily each way, the service controlled most of the transport on the main road and required 300 horses and three main fodder stations. Fares ranged from 5s. for outside seats to £5 inside. Each mail coach carried an armed guard, and two when bullion was aboard. Although the service was never held up by bushrangers, Page himself was once stopped in Epping Forest by two of them, Ogden and Sullivan; he refused to take them seriously and was allowed to pass on, chiefly, he claimed, because one of them had worked for him. A more serious challenge came in 1873 when Alfred Burbury started a rival coach service, but within three years Hobart and Launceston were linked by railway.

During his coaching operations Page acquired many pastoral properties, including Northumbria, Anstey Barton, Woodlands, Kelvin Grove, Trefusis, Ellenthorpe, Stonehenge and Mount Vernon. At one time his landholdings and his flocks of 63,000 sheep were said to be the largest ever held by one person in the colony. Page was an enthusiastic breeder of race-horses and, with Sir James Agnew and James Lord, he helped to found the Tasmanian Racing Club in Hobart. He died at Hobart on 31 March 1878, and his widow on 9 August 1882. Of their four sons and six daughters, Alfred ran a stud farm at Melton Mowbray on a portion of Woodlands. Alfred’s son, Charles Service Page, followed in his father’s and grandfather’s footsteps and served for twenty years on the committee of the Tasmanian Racing Club.

The Archives Office of Tasmania has catalogued this entry on Page’s Royal Mail Coach:

Page’s Royal Mail Coach operated passenger services between Launceston and Hobart carrying approximately 17 passengers per trip. A timetable of coaches appears in Walch’s Almanac. The company was established in 1848, and until the 1870s was one of the main operators in Van Diemen’s Land. With the completion of the Tasmanian Main Line Railway from Hobart to Launceston in 1876, travel time was reduced from 14-15 hours to seven and the use of the coach service declined. Samuel Page died on 31 March 1878.
Information Sources:

This notice about the Gregsons appeared in The Mercury, 19th February 1874

“By Page’s coach yesterday morning, three prisoners were brought down from Launceston in irons, under the charge of Superintendent Tinmins and Sub-inspector Clements, of the Hamilton Police. Two of the prisoners, named Gregson, absconded from this city [i.e. Hobart] some seven or eight weeks ago, and made their way through the back country to their sister’s residence in Launceston, where they were arrested. The other one, Mitchell, is known by several names. He absconded from the Launceston gaol, and having been arrested in the country, has now been removed, and with the Gregsons, placed in the gaol here.”

Thomas Nevin photographed the Gregsons brothers at the Police Office Hobart on February 18th 1874 after arrival from Launceston when arrested per these entries:

These two carte-de-visite prisoner identification photographs of the Gregson brothers – Francis Gregson on left, John Gregson on right – were produced by T. Nevin in February 1874 for the Municipal Police Office, Town Hall, and the Hobart Gaol criminal records sheets to which these mugshots were originally pasted. They are now held at the National Library of Australia, minus the record sheets. The duplicate below printed from the negative of the one sitting of John Gregson taken by Nevin, numbered “66”  is now held at the Tasmanian Museuem and Art Gallery where it was deposited after removal from the QVMAG collection for an exhibition at the Port Arthur prison heritage site in 1983 (and wrongly attributed to A. H. Boyd). Both of the NLA photographs were accessioned in Nevin’s name in 1964.

Other photographs by Thomas J. Nevin held at the Queen Victoria Museum and Art Gallery are the collection of Tasmanian prisoners 1870-1879 deposited in the 1930s from convictaria collector John Watt Beattie’s estate.

ADDENDA
Coincidence: The photograph below of a man called Samuel Page who also ran coaches – to the Huon – is not the same Samuel Page as the one pictured above, per emails from this Samuel Page’s descendants. This photo is held at the Archives Office of Tasmania: