“Look for a long time at what pleases you and longer still at what pains you.” 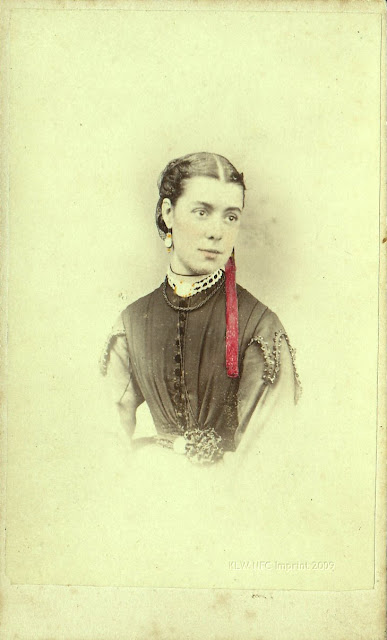 This portrait is one of six extant photographs of Elizabeth Rachel Nevin nee Day (1847-1914) taken by her husband commercial and police photographer Thomas J. Nevin between 1865 and 1900.

Life at the Studio
In 1944, the French writer Sidonie-Gabrielle Colette (1873-1954) published a short story called The Photographer’s Wife (La Dame du Photographe 1944), in which Mme Armand, the wife of the photographer – he who is referred to by their neighbour as “little old Big Eyes” – attempts suicide, some might think for an adulterous liaison, while she herself explains the reason as an unbearably trivial life. The drug she self-administers is not named, but at the moment when old Big Eyes raises the alarm, his hands are “all covered with hyposulphite” from a broken bottle in the studio. Hyposulphite was used in daguerreotype, ambrotype and collodion photography, one of several photochemicals including arsenic and cyanide with ready appeal to a self-poisoner. Colette set the story back in the mid 19th century at the time of Queen Alexandra whom the photographer’s wife emulates in dress and manner:

Madame Armand, who had regular features, remained faithful to the high military collar and the tight, curled fringe because she had been told she looked like Queen Alexandra , only saucier. (p. 536, The Collected Stories of Colette, Phelps ed, 1983).

Queen Alexandra, queen consort of Edward VII of Great Britain, and the daughter of Christian IX of Denmark, was married to the then-Prince of Wales in 1863, while mother-in-law Queen Victoria was still in mourning. She was known for founding Queen Alexandra’s Royal Army Nursing Corps.

Elizabeth Rachel Day’s life as the wife of photographer Thomas J. Nevin in colonial Tasmania was very different from Colette’s literary portrait. However, from her marriage in 1871 until her husband’s residential appointment at the Hobart Town Hall in 1876, she lived and slept above a veritable factory of poisonous chemicals stored and used in her husband’s studio, a double-windowed building and glasshouse with the business name of The City Photographic Establishment, located at 140 Elizabeth St. Hobart.

Thomas J. Nevin worked with poisonous chemicals on a daily basis. He shared some of the processing with his brother John (Jack) Nevin at their New Town studio in the early to mid 1860s, while he was still a bachelor and while both brothers still resided with their parents at the house built by their father at Kangaroo Valley. With the acquisition of Alfred Bock’s stock and studio at 140 Elizabeth St. Hobart on Bock’s departure from Tasmania in 1865, Thomas Nevin moved into the residence attached to the studio, engaged another photographer Robert Smith in a partnership there briefly with the business name of Nevin & Smith (1867-68), and on Smith’s departure for Victoria, commenced a serious courtship with Elizabeth Rachel Day.

When they married in 1871, Elizabeth Rachel Nevin nee Day moved into the residence above the studio at 140 Elizabeth St. where she remained with the first of their two children born there  – May (Mary Florence Elizabeth Nevin, b. 1872); and Sonny ( Thomas James Nevin jnr, b. 1874) – until her husband Thomas J. Nevin was appointed to the Keeper’s position at the Hobart Town Hall, residency included, in 1875. Whenever Thomas Nevin was absent from the Elizabeth St. studio in 1874, on government business, for example, at the Port Arthur prison working with the Commandant-Surgeon Dr. Coverdale in preparing photographic documentation of prisoners being relocated to the city prison, the Hobart Gaol, or travelling with fellow photographer and close friend Samuel Clifford on commercial photographic excursions, Elizabeth Rachel Nevin’s father – master mariner Captain James Day – would stay with her, He registered the birth of their first son – Thomas James Nevin jnr – in May 1874 during her husband’s extended stay at Port Arthur (60 kms from Hobart).

Above: Stereo viewer and stereo of a photographer seated in his studio surrounded by chemicals and apparatus. From The Tasmanian Museum and Art Gallery Collection. The catalogue number is written on the viewer.

By mid 1875, Thomas J. Nevin had set up studios at the Hobart Gaol in Campbell Street (above the women’s laundry) and at the Mayor’s Court and Municipal Police Office, Hobart Town Hall where he was soon to take up permanent residency with wife Elizabeth and the first two of his six children to survive, May (b.1872) and Thomas (b.1874), both of whom were born at the old city studio. He  advertised the sale of the studio at 140 Elizabeth St. Hobart, but retained his commercial practice with Samuel Clifford, who retired in 1878 and Henry Hall Baily. On departure from the Hobart Town Hall keeper’s position in 1880, Thomas J. Nevin resumed commercial and government contract photography at his New Town studio until ca. 1888.

TO LET, those eligible BUSINESS PREMISES in Elizabeth-street, presently occupied by Mr. Nevin, photographer. It is a double-windowed shop, has a large glass-house or gallery at the back, and has a side cart entrance. Apply to
G. S. CROUCH
Auctioneer

These two later photographs of a total eight extant photographs taken by Thomas J. Nevin of his wife Elizabeth Rachel Day date to ca.1878 and 1900 respectively, held in private collections: