The Rap Sheet 1865-1896
James Geary was born in Hobart to Ellen and Stephen Geary, a labourer, on 12th March 1844. His career in convicted crime began with horse-stealing in 1865, at 20 yrs old. He was photographed by Thomas J. Nevin in 1874 on discharge from the Hobart Gaol when he was 30 yrs old. His next extant mugshot was taken by Constable John Nevin at the Hobart Gaol in 1877, now 33 yrs old. His last police photograph was taken (by unknown) at the Police Office, Hobart in 1893 when he was 49 yrs old. Date of death unknown, possibly 1897 (see below).

The first mugshot 1874 by T. J. Nevin
This is one of Thomas J. Nevin’s finely produced albumen prints of Tasmanian prisoners taken on contract in the 1870s for the colonial government, typical of his commercial studio practice.

The note “Taken at Port Arthur, 1874” on the versos of hundreds of these 1870s police mugshots was written by John Watt Beattie and Edward Searle in the early 1900s for sale at Beattie’s “Port Arthur Museum” located in Hobart, and for inclusion in the travelling exhibition of convictaria on board the fake convict hulk Success to Sydney, Melbourne, Hobart and Adelaide.

James Geary was photographed by Thomas Nevin on being discharged from the Municipal Police Office, Town Hall, Hobart on 20th February 1874.

But James Geary reoffended. Warrant for his arrest issued on 6th November 1874

James Geary was arraigned at the Hobart Supreme Court on 1st December, 1874. The first photograph taken on discharge by Thomas Nevin in February 1874 was retained as further offences were recorded on his rap sheet but in 1877 another photograph was taken at the Hobart Gaol.

James Geary served a short sentence of less than two years at the Port Arthur prison, arriving there on the 1 August 1868: he was “transferred to the House of Correction for Males Hobart Town to complete his sentence” on 28 March 1870, per this record signed James Boyd Civil Commandant. He was not photographed at Port Arthur. He was photographed in the last weeks of incarceration at the Hobart Gaol by Thomas J. Nevin prior to discharge in February 1874.

The 1874 photograph of James Geary, aged 30 yrs, taken by contractor Thomas J Nevin is a finely produced albumen print exhibiting the commercial portraiture techniques typical of Nevin’s work for police in this decade. 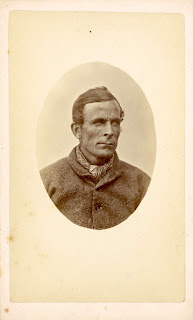 The Missing Photo Book forms, 1870s
This form (below) was specifically designed to be included in the Police Office Photo Books. The basic information of the prisoner’s appearance and his/her latest offence accompanied the photograph.The government printer James Barnard used these photo books in the preparation of notices of prisoner movements when he published the weekly police gazettes during the 1870s. Each page was numbered at top right, and the wording “Date when Photograph was taken” printed prominently as the header just below it, indicating clearly that the purpose of this form was to be a photographic record. For some reason very few of these Photo Book pages carrying mugshots of Tasmanian prisoners taken in the late 1870s have survived. This full frontal photograph of James Geary was taken at the Hobart Gaol “about the year 1877“, probably by Thomas Nevin’s brother, Constable John Nevin.

Hobart Gaol 1889: Larceny
When James Geary was arrested again for larceny in 1889, aged 45 yrs, the mugshot taken of him at the Hobart Gaol in 1877 was reprinted and pasted to this later rap sheet (the blue form). The rough and ready values of prisoner identification photographs produced everywhere by 1900, including the full-face frontal gaze, characterise this sort of mugshot.

Police Office, Hobart 1893
Convicted and incarcerated for a series of minor offences at the Municipal Police Office, Hobart, James Geary was photographed in 1893 at 49 yrs old, looking rather healthier in this mugshot (below) than in 1877. He married 44 year old widow Jane Saunders in 1894, his occupation listed as a 48 yr old labourer and bachelor. However, he may have died of heart disease one year after his last conviction, at Black Brush, Brighton, north of Hobart, in the house of John Samson. An inquest was held on 4th January, 1897, but the registration of his death on 2nd January at Black Brush gave his age as 43 yrs old rather than 49 yrs, possibly because the date of his birth, as written on the record, states “not known”. The Tasmanian police gazette published this same man’s age as 40 yrs old when the notice of the inquest was published on January 29th, 1897 (p. 18).

Even as late as 1893, the photographer at the Municipal Police Office, Hobart, where this photograph was taken, was still printing prisoner mugshots in the oval mount used by Thomas J. Nevin for his mid 1870s cartes-de-visite of prisoners at the Mayor’s Court, MPO and Hobart Gaol.

Tasmanian police gazette listed this man’s age as 40 yrs old when the notice of the inquest was published on January 29th, 1897 (p. 18), and not 43 yrs old which was listed at the inquest. If the same man, he was actually 49 yrs old,