“Burial-Ground at Millbank Prison. From a Photograph by Herbert Watkins, 179, Regent Street.” Wikipedia

When Thomas J. Nevin photographed prisoners in Tasmania in the decade 1870-1880, his preferred pose for photographing the prisoner was in semi-profile, torso sometimes visible to the waist. No particular emphasis was placed on capturing marks, tattoos, and disfigurement of the hands. Further reduction of information occurred when he printed the final image as a carte-de-visite in an oval mount, a format small enough to fit onto a criminal record.

Studio portraiture by commercial artists such as Thomas Nevin was requested by prison and police authorities during the early years from the late 1860s to the 1880s, for economic reasons, as stated in the case of the Pentridge photographer in Victoria.

VICTORIA. The system of taking photographic likenesses of prisoners at the Pentridge Stockade is stated to have proved of great assistance to the police department in detecting crime. The system was commenced at Pentridge about two years ago, and since then one of the officials who had a slight knowledge of the art, with the assistance of a prisoner has taken nearly 7000 pictures, duplicates of which have been sent to all parts of this and the adjacent colonies. But it has been considered rather too expensive, to employ an official entirely for the purpose, and as constant employment could not be provided in the future, a photographer has lately been appointed, who will visit the stockade twice in the week, and the hulks at Williamstown once. –Argus.

The Victorian government employed a commercial photographer to visit the Pentridge prison twice weekly, and to visit the hulks moored at Williamstown once a week. Police found it cheaper if the photographer visited the prisons twice week rather than employing a warden or constable full-time.

During the decades 1880-1890 at the Hobart Gaol, commercial photographer Thomas Nevin and his brother Constable John Nevin deployed various techniques in both the posing of the prisoner for the capture and the printing of the final portrait. In some instances, they retained the conventional printing format of commercial carte-de-visite production; in others, they posed the prisoner in a full face pose with his gaze directed at the camera lens. In some – but not as consistently as was the case with New Zealand police photographers – they requested the prisoner to show his hands.

All three variations can be seen in this collection held at the Tasmanian Archives and Heritage Office, now on Flickr: all of these mugshots were taken in the 1880s at the Hobart Gaol. 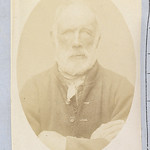 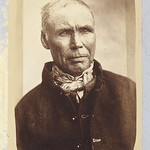 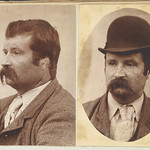 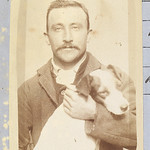 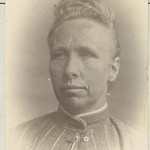 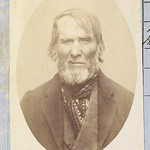 By the late 1880s, the Bertillon method of photographing prisoners twice, in profile and full frontal, was adopted universally by prison authorities; the prominent display of hands was a new requirement.

Millbank Prison 1888
What follows is a journalist’s description of a visit to Millbank Prison (UK) in 1888 to watch the prison photographer at work. In the first paragraph, the “liberty man” is being photographed for discharge. In the last paragraph the journalist gives some technical details: the photographer “gives an exposure of fifteen seconds with a wet plate and No. 2 B lens, and secures an admirable negative.”

PHOTOGRAPHING IN MILLBANK PRISON.
The photographer at Millbank is one of the steel- buttoned warders, and we congratulate him on his well-arranged studio. Here are some pictures he has just taken — half profile, bold, clear, and vigorous portraits, well lighted, and altogether unlike what prison photographs usually are. There is no ‘prentice hand here, and we say so.

A sitter is departing as we arrive — a man in ordinary attire, his short, cutaway beard giving him the appearance of a foreigner. Our guide sees our look of astonishment — ‘ He is a liberty man, and is photographed in liberty clothes ; he goes out next week, and has, therefore, been permitted to grow a beard during the past three months ;’ and on the desk we see a printed form referring to him, to which his photograph will presently be attached, ‘ Seven years’ penal servitude, three years’ police supervision,’ is upon it. His crime was forgery.

What, we ask, if a man refuse to be photographed just before the expiration of his sentence ? Our guide smiles — ‘It is a very simple matter ; a man is usually set at liberty before his time, but only if he conforms to our regulations.’ The guide leaves us for a while, and the photographer asks if he shall go on with his work. We reply in the affirmative, and he quits the studio to fetch a sitter. He is not long gone, for there are plenty outside in the yard we have just crossed, men in grey, ambling round the flagged area at a rapid pace at a fixed distance from one another, and reminding you vividly of a go-as-you please race at the Agricultural Hall.
He is a young man of stalwart build, the sitter, when he appears, and as docile as a dog. He is clean shaven, and has an ugly black L on his sleeve, which means, poor fellow, that he is a ‘Lifer.’ There is a wooden arm-chair for posing.

‘Look here, I want you to sit down like this,’ says our friend the photographer, placing him sideways in the chair, so as to give a half profile. The convict does as he is told, and evidently enjoys the business immensely. ‘Don’t throw your head back quite so much ; there, that will do. Now put your hands on your breast, so.’ For the shrewd governor believes that a photograph of a man’s hands is as important almost as that of his face. The warder photographer retires to coat his plate, and we are left for a moment with a ‘Lifer.

Why shouldn’t he make a rush for it, fell us to the earth, and have a try for liberty? He might be a murderer; that he had committed a terrible crime was certain from his sentence. Keep the camera between yourself and the man, and be ready to roar out lustily if he so much as move a muscle, was one precaution that occurred to us; or should we knock him down out of hand before he began any mischief at all ? No such precautionary measures are called for. Indeed, it made one smile to think of such a thing as resistance. One might, perhaps, conjure up such thoughts as these in the presence of a typical convict; but the facts here are very commonplace.

On the arm-chair opposite you sits a young man, almost a boy, with a frank, good-humoured face — a poor fellow who is evidently luxuriating in a delightful moment of release from drudging work and monotonous labour. And as to the bravado and ruffianism, there is just the same difference between the daring robber and this gray-clad humble individual as there is between a fighting cock with his plumes and feathers and a plucked fowl on the poulterer’s counter.

The photographer comes back to the docile prisoner, focusses; gives an exposure of fifteen seconds with a wet plate and No. 2 B lens, and secures an admirable negative. ‘ I have never had the least difficulty,’ he says, after he has led back his charge, ‘ either with the men or the women. The men are apt to be too grave, and the women are sometimes , given to giggling, that is perhaps the only drawback I have to contend against’