Chief Justice Sir Francis Villeneuve Smith (1819–1909) of the Supreme Court Hobart was administrator of the colony of Tasmania in 1874 and most interested in the uses of judicial and forensic photography which he had witnessed on a visit to Victoria in 1872 (TRE1/1/363 1154). He was photographed by the Hobart City Corporation’s commissioned photographer Thomas Nevin in the 1870s in an unusually informal pose, his expression one of vindication while examining a carte-de-visite photograph of a prisoner held in his right hand. Sir Francis Smith’s professional interest in the uses of judicial photography to increase surveillance and reduce crime was more than justified when he became the victim of burglary himself at his home by absconder and recidivist George Fisher in 1877.

George Fisher had served a sentence of 12 years for the crime of burglary committed in 1861. He was discharged on 17th April 1874, granted a ticket-of-leave, and re-offended within months. Thomas Nevin’s commission to photograph prisoners on arraignment at the Supreme Court from the early 1870s proved most effective when this photograph of Fisher, taken in December 1874 on Fisher’s incarceration at the Hobart Gaol Campbell St. for “forging an order to defraud J. E. Risby” was reprinted and re-issued for his re-arrest in 1877 for the burglary at Sir Francis Smith’s home. George Fisher had been sentenced to 12 years in December 1874 by the Chief Justice, and sent to Port Arthur, arriving there on Christmas Day. He was transferred back to the Hobart Gaol one year later in December 1875. In August 1877, he managed to abscond, broke into the Chief Justice’s home and stole several articles of clothing and other items of personal property. The mugshot being examined by Sir Francis Smith in this reprint by Beattie for the Members of Parliament album (1895) was issued with the arrest warrant for Fisher in 1877, as one of Nevin’s several duplicates taken in December 1874 – January 1875.

Rough Calendar of the Hobart Supreme Court
Habitual criminal George Fisher was sentenced twice – in 1875 and 1877 – at the Supreme Court Hobart by Chief Justice Sir Francis Villeneuve Smith. These records are from the Supreme Court Calendars which were used by photographer Thomas J. Nevin as an indication of which Oyer sessions he need to attend, and which prisoners he needed to photograph around the date of sentencing. A simple tick next to the prisoner’s name showed that a bill was issued and paid, and a photograph taken. The “C. J” initials against a name or sentence indicate the judgement passed by the Chief Justice Sir Francis Smith.

In reverse order, these official records document George Fisher’s criminal career from this sentence in 1877 back to his earliest record of arrival in VDL in 1845.

Warrants issued for the arrest of George Fisher, 3rd August 1877 and the 7th September 1877.

WARRANTS ISSUED, AND NOW IN THIS OFFICE
HOBART TOWN. – On the 3rd instant, by E. Maher, Esquire, J.P., for the arrest of George Fisher, charged with having, on the 32st ultimo, at Hobart Town, feloniously and burglariously broken and entered the dwelling-house of Sir Francis Smith and stolen therefrom one blue cloth sacque coat, value £4, two pairs of coloured blankets, value £5, and other articles, amounting in all to the value of £15, the property of Sir Francis Smith.
For description see Crime Report of the 31st ultimo, page 138, Absconded.

George Fisher, per Stratheden, was sent to the Port Arthur prison, arriving there on Christmas Day, 25th December, 1874. He was sent back to the Hobart Gaol, Campbell Street, on 5th December 1875.

1874: Ticket of leave and recidivism

George Fisher had served a sentence of 12 years for the crime of burglary committed in 1861. He was discharged on 17th April 1874, granted a ticket-of-leave, and re-offended within months.

Source: Tasmania Reports of Crimes for Police (weekly police gazettes)
George Fisher, per Stratheden, TL, 48 years old, was arraigned in the Supreme Court Hobart, 1st December 1874, sentenced to 12 years for forgery and stealing. He was sent to the Port Arthur prison, arriving there on Christmas Day, 25 the December, 1874. He was sent back to the Hobart Gaol, Campbell Street, on 5th December 1875, spending just 12 months there.

1861: Burglary
In 1861, George Fisher was sentenced to twelve years for burglary which he served at Port Arthur until he was enlarged with a ticket-of-leave in 1874. See the transportation record below for the lengthy list of offences committed from arrival in 1845 until 1874.

Sir Francis Smith (1819–1909)
Sir Francis Villeneuve Smith administered the colony in 1874-75 and did so again in 1880. The Australian Dictionary of Biography details his birth, education and judicial career. 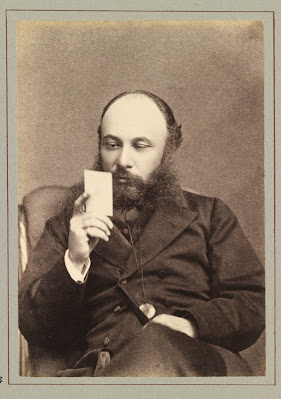 Although this photograph is accredited to J.W. Beattie (1859-1930) by the State Library of Tasmania, it is a reprint made several decades later than the original capture taken in the late 1870s . Here the Tasmanian administrator, Attorney-General and Chief Justice, who was born in 1818, looks like a man in his fifties. He appears to be about 15 years older than his earlier 1860s portrait by Reutlinger, Paris 1860s, (below) which portrays a man in his early forties. Sir Francis Smith would have been an old man of eighty years or so by the time Beattie produced his Members of the Parliaments of Tasmania series in 1895-1900, and clearly this is not a portrait of an eighty year old. It is yet another reprint by Beattie without acknowledgement to the original photographer.

APPENDIX A Succession of Governors and Administrators

Supreme Court Calendars 1870-1882
The “C. J” initials against a sentence indicate the judgement passed by the Chief Justice Sir Francis Smith. The initials “P. O.” indicates Police Office. Dozens of photographs of prisoners taken at these sessions by T. J. Nevin are extant in public collections.

In 1883, Chief Justice Sir Francis Smith signed the death warrant for James Sutherland. Thomas Nevin’s hand-tinted carte-de-visite photograph of prisoner Sutherland was pasted next to the death warrant at the Hobart Gaol when the records were bound in book form.

The death warrant for the execution of James Sutherland at the Hobart Gaol 1883 was signed by Chief Justice Sir Francis Villeneuve Smith. The black seal attached to these Supreme Court of Tasmania warrants is the Royal Arms insignia used by the colonial government on all their judicial documents. It was also designated for use as Thomas J. Nevin’s government contractor studio stamp which was printed on the versos of prisoner photographs (one per batch of 100 was submitted for his commission while still operating as a commercial photographer), and on the versos of photographs taken of government officials and their families (extant in public collections at the QVMAG, the SLNSW, the TMAG, the NZNL, and in private collections.)