[Above]: Black and white print reproduced at the QVMAG in 1985 from the original print below from Thomas Nevin’s original negative, scratches removed and cleaned up. 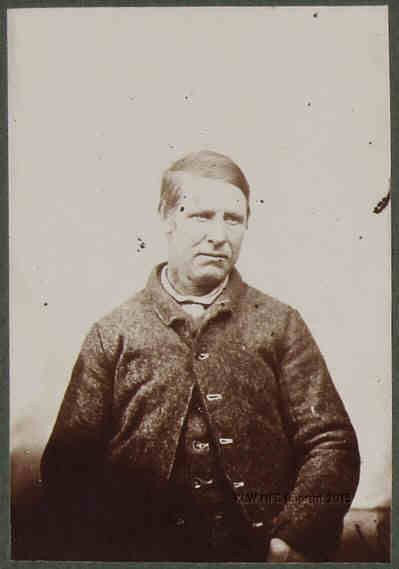 The originals of these forty (40) individual prints of Tasmanian prisoners photographed at the Hobart Gaol by the commissioned photographer Thomas J. Nevin in the 1870s, were intended to be pasted to the criminal record sheet of each prisoner. It was customary to photograph a person before conviction and after it, and again on discharge, by order of the Tasmanian Attorney-General from 1872 onwards, and since the men whom Nevin photographed were repeat and habitual offenders, the same glass negative was used again and again. The plates were handled repeatedly to produce duplicates for distribution to regional prisons and police stations, and for the many administrative copies required by the central Municipal Police Office at the Town Hall, the Supreme Court and the Hobart Gaol.

Photographs from the glass negatives were produced in various formats, first as uncut and unmounted prints as in these 40 prints, and again in carte-de-visite format within an oval mount, a practice which persisted in Tasmania through the 1870s, 1880s and into the 1890s. The same cdv was sometimes overlayed again in an oblong mount when the glass plate became too damaged for further use. All three photographic formats appear on the criminal record sheets of prisoners bound together as the Hobart Gaol record books dating from the late 1880s onwards, held at the Archives Office Tasmania. Some of the earlier gaol record books of the 1870s have survived, now mysteriously missing the prisoners’ photographs. One possible explanation is that convictaria collector John Watt Beattie and his assistant Edward Searle removed the photographs or even destroyed the sheets in the early 1900s while trying to save the photographs, the bulk of which ended up at the Queen Victoria Museum and Art Gallery from their acquisition in 1930 of John Watt Beattie’s estate.

This carte-de-visite of William Kellow, one of the extant hundreds of Tasmanian prisoners taken in the 1870s and printed in an oval mount, is held at the Tasmanian Museum and Art Gallery, Hobart. It was originally held in the Queen Victoria Museum and Art Gallery, Launceston, together with another three hundred or more 1870s mugshots taken at the Hobart Gaol by government contractor Thomas J. Nevin which were acquired by the QVMAG as part of the bequest from the estate of John Watt Beattie in the 1930s. When this cdv, along with 55 more now at the TMAG, were removed from Beattie’s collection and taken down to Port Arthur for an exhibition in 1983, it was not returned to the QVMAG. It was deposited instead at the TMAG . The QVMAG list (2005) showed a total of 199 mugshots, but only 72 were physically held at the QVMAG when the list was devised. A total of 127 mugshots were missing by 2005. This carte-de-visite of William KELLOW is one of those listed as missing, number 143. See the list here.

Prisoner William Kellow, 43 years old and locally born, was sentenced at the Supreme Court Hobart on 10 September 1872 to 3 years, convicted of feloniously receiving. He was photographed at the Hobart Gaol by T. J. Nevin prior to relocation to the Port Arthur prison, and was returned to the Hobart Gaol in late 1873 where he was discharged in the week of 10th February 1875.