This carte-de-visite of an unidentified older woman, one of many older women who favoured Thomas Nevin’s services for this type of full-length studio portrait, is unusual in that the pink tint applied to the ribbons tied in a bow at her neck is the same shade of pink applied to the ribbons worn by Pangernowidedic in a reprint, ca. 1875 of four Tasmanian Aborigines who were photographed originally in 1864 as a series at Government House (see below). 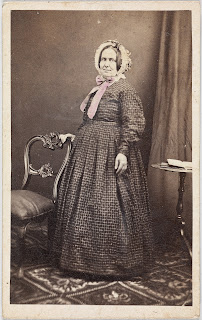 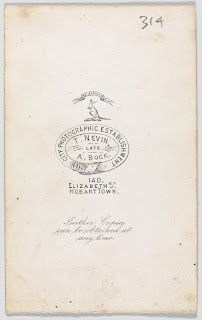 The verso stamp of this cdv bears photographer Thomas J. Nevin’s most common extant commercial design which he adapted from a late example of his predecessor’s, Alfred Bock, when Nevin acquired the business, the City Photographic Establishment, on Bock’s departure from Tasmania in 1867. The verso stamp on this carte-de-visite is identical to the cdv (below), taken of Elizabeth Bayley in late December 1874 (Tasmanian Museum and Art Gallery collection), and printed in blue ink rather than black. The chair, carpet and table are the same in both cdvs, suggesting their captures date within days or months of each other, although the NGV has dated their photograph to 1865-1867. Both women were also photographed with the same body orientation to the viewer’s left. The older woman directed her gaze to the right of the photographer, while the younger woman fixed her stare squarely at him. The cdv of Elizabeth Bayley held at the TMAG, however, is not tinted. 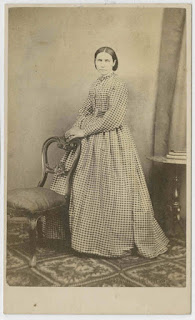 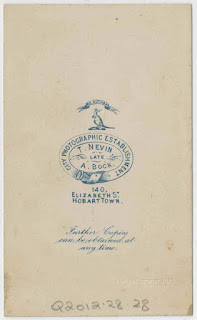 Pink and Blue Tinting
The original session in which this photograph was taken of Tasmanian Aboriginal people identified by Julie Gough (2014) as William Lanne (male, seated), Mary Ann (standing), Trucanini (on viewer’s right) and Pangernowidedic (on viewer’s left) is dated 1864 and widely credited to the studio of Henry Albert Frith of 19 Murray Street, Hobart. The original photograph was mass produced over the next 40 years in various formats, as a large albumen silver photograph (NGA), as a sennotype, as a lantern slide, and as a plain mounted rectangular carte-de-visite. A reproduction was obtained by Sir George Grey (1812-1898), Governor of New Zealand, probably ca. 1882 through requests in letters (Auckland PL manuscripts) made to the former Tasmanian Surveyor-General James Erskine Calder for long-neglected Tasmaniana. Calder sourced books mainly from bookseller William Legrand and photographs from John Watt Beattie whose major source of early Tasmanian photographers’ work for his own commercial reproduction from the 1890s onwards was the Royal Society’s Museum. This one sent to Grey was not a late Beattie reproduction; it was an older reproduction, a hand-tinted copy from the 1870s already held by the Museum when it was sourced and sent to Grey in New Zealand, and which he shortly afterwards donated to the Auckland Art Gallery in 1893.

Auckland Art Gallery
Title: The Last of the Native Race of Tasmania
Production Date:
Medium: black and white photograph, hand coloured
Size (hxw): 200 x 170 mm
Inscription:
THE LAST OF THE NATIVE RACE OF TASMANIA / ALL DEAD / THE ORIGINAL PICTURE TAKEN FOR THE TASMANIAN GOVERNMENT AND PLACED IN THE MUSEUM, HOBART, 1865. PHOTOGRAPHY BY H.A. FRITH. PUBLISHED IN THE ILLUSTRATED LONDON JOURNAL , 7TH JANUARY 1865 (PAGE 13). A LARGE COPY, TAKEN FROM THE ORIGINAL NEGATIVE, HAS BEEN PURCHASED BY SIR GEORGE GREY, TO BE PLACED IN THE ART GALLERY, AUCKLAND.
Credit Line: Auckland Art Gallery Toi o Tāmaki, gift of Sir George Grey,1893
Accession No: 1893/2 Other ID: 1893/2/A
http://www.aucklandartgallery.com/the-collection/browse-artists/723/henry-albert-frith

This second photograph dates from the same sitting in 1864 with minor changes to seating positions and clothing. It is also a hand-tinted reproduction dated ca. 1875 by Jane Lennon when John Hawkins published it in 2008. Hawkins notes the seating re-arrangement but not the fact that the balustrades on the upper internal balcony on either side of the sitters are more visible, while the tops of the columns are not. This may be another photographer’s negative, perhaps one taken by someone working with Frith, Letitia Davidson, for example, who may have been present on the occasion, which was the annual Ball held at Government House in honour of Queen Victoria’s birthday (May 27th, 1864). The print is not as carefully reproduced as the one above, and the hand-tinting differs slightly as well.

Both of these reproductions were hand-tinted after printing at dates later than the 1864 original sitting, These two images were not processed as sennotypes of the 1860s for which both Henry Frith and Alfred Bock were renowned exponents, nor were they reproduced in the genre of photographic portraits painted over in oils which were much sought after in the 1890s. These reproductions were delicately tinted by studio colorists in the 1870s, using three colours: blue, yellow, and pink, typically applied to some feature of apparel and to some facial features. This palette and application to prints is typically found on Nevin’s portraiture of family, clients, and convicts. In similar manner to the tinting of NGV’s full-length portrait of the unidentified woman by Nevin, the colorist ca. 1875 applied the same shade of pink tint to the same object of clothing in this image, namely to the ribbons worn by Pangernowidedic, seated next to William Lanne on extreme left.

The plate from which prints were obtained for this photograph was offered at auction recently by Gowans, Moonah, Tasmania, 19th June 2015:

The plate’s provenance or previous ownership is unknown after its first use. The colonial government issued the commission first in 1864 to underscore the official narrative that the civilizing of Tasmanian Aborigines had been a successful endeavour, hence the dressing up of the sitters in elaborate European clothing and their presence at official events commemorating Queen Victoria’s birthday. The plate may have arrived at Thomas Nevin’s studio for reproduction in the early 1870s through requests for further prints by the colonial government as the belief that Tasmanian Aborigines were near extinction was becoming more widespread. Once Thomas Nevin ceased contractual work in 1888, his commercial and government stock was passed on to photographer and collector John Watt Beattie whose government commission from the 1890s was the promotion of Tasmania’s heritage in intercolonial markets. The stock phrase to tout this and many more images of Tasmanian Aborigines in the name of tourism at the turn of the 20th century was “Last of Tasmanian Aborigines“.

Vignetted portraits of Tasmanian convicts from the 1870s-1880s are relatively rare, and hand-tinted portraits even more remarkable, given the photographs were taken for daily use by police in the course of surveillance, detection and arrest. Prisoner identification photogaphs (portraits or mugshots) were taken and printed by commercial photographer Thomas J. Nevin from 1872 to 1876 for the Municipal Police Office registry, Hobart Town Hall, while he was still operating from his studio, the City Photographic Establishment, 140 Elizabeth St. Hobart, and thereafter to 1888 while in civil service. Nevin and his assistants printed several mugshots as vignettes (cloudy background) and hand-tinted the prison-issue, check-patterned scarf in light blue to better identify the sitter as a prisoner. At least seven of these hand-tinted prisoner photographs by Nevin are held in public institutions (NLA, TMAG, and SLNSW). This one taken of prisoner Job Smith, alias William Campbell, was hand-tinted by Nevin’s studio with the same duck-egg blue tint used on the 1875 reprint of the four Tasmanian Aborigines. It dates to May 1874 when Nevin returned with Job Smith, known then by his alias William Campbell, from Port Arthur to be tried for rape at the Supreme Court, Hobart. Job Smith was executed on 31st May 1875.