Cartes-de-visite such as these two examples which were sold at the respective Hobart studios of photographers Peter Laurie Reid (cdv on left) and Thomas J. Nevin (cdv on right) in the years 1865-1868 were novelty items. They were placed on the first page of a photograph album and intended to be read and recited when the viewer first opened it. 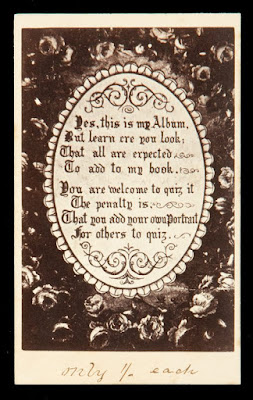 Peter Laurie Reid’s basic sample, advertised at “only 1/- each” (one shilling) included the usual flowery border encircling the commonly included generic verse inviting the reader to add their own portrait as quid pro quo or fair exchange for the privilege of sharing. The same verse appears on both cdvs; on Thomas J. Nevin’s sample, it was capitalized:

YES, THIS IS MY ALBUM.
BUT LEARN ERE YOU LOOK,
THAT ALL ARE EXPECTED
TO ADD TO MY BOOK.

YOU ARE WELCOME TO QUIZ IT,
THE PENALTY IS –
YOU ADD YOUR OWN PORTRAIT
FOR OTHERS TO QUIZ.

Thomas Nevin’s sample from the same era was much more elaborate, giving the viewer plenty to quiz. Was this cdv a commercially available album opener purchased from photographers’ stockists too? The young woman with her inviting smile in that case would supposedly represent the ideal to the prospective purchaser who was beginning her own family. Or did Thomas Nevin compose this card himself to include a photograph of his fiancée Elizabeth Rachel Day? One of their grandchildren seemed to think so when they inscribed the mount in capital letters “GRANDMA NEVIN“. If so, of course she would be smiling at him (her chosen future husband or any prospective spouse, for that matter) from within her flowery bower, spring time flowers in her hair, a large fan in her hand,  the photograph album itself with metal clips placed beneath the large scroll bearing the verse, and all set off on either side with a pair of Victorian mantle lustre vases, each with four sparkling lustre drops.

The original album from which Elizabeth Nevin’s album opener was removed, was long ago dismantled, its contents shared among her children, grandchildren and great grand children over many decades from the early 1900s to the present day. But perhaps her album was already purchased and sitting on the table in front of her, partially covered by her hat, when Thomas Nevin posed her for this full-length portrait taken at his studio in her twenty-first year, 1868.

Elizabeth Rachel Day (1847-1914) married photographer Thomas J. Nevin (1842-1923), on 12th July 1871 at the Wesleyan Chapel, Kangaroo Valley, Hobart Tasmania. This full-length portrait taken by Thomas J. Nevin in February 1868 is printed verso with the stamp of his firm’s name at the time, Nevin & Smith. Robert Smith and Thomas Nevin established the business soon after Thomas Nevin acquired the stock, studio and glass house of Alfred Bock at 140 Elizabeth St. Hobart Town in 1865. The partnership was brief, lasting two years. It was dissolved by Nevin’s family solicitor, the Hon. W. R. Giblin, in February 1868. Robert Smith left Tasmania soon after and established a studio at Goulburn, NSW.